Bratislava, 20 June 2019: The average life span of Slovaks is nearly 74 years, but the average length of a “healthy” life is only 54.5 years for men and 57 years for women. In an EU ranking of senior citizens’ health, only Lithuania, Hungary, Latvia, and Romania fared worse. Slovakia and these other countries are at the bottom of rankings when it comes to living a healthy life at an older age. Scientists from Comenius University and the University of Vienna therefore want to increase awareness about having a healthy lifestyle among senior citizens.

A healthy lifestyle, encompassing diet and physical activity, contributes to a significant reduction in chronic diseases and to a better quality of life, including for one's mental health. The steady increase in average life expectancy in Central Europe, accompanied by age-related diseases, is a social and economic challenge that will impose a significant financial burden on health care in the future. “This is why it is necessary to raise the awareness of senior citizens now and in the future about nutrition and diet, as well as the awareness of professional staff and all people who support senior citizens in their lives,” said Jana Muchová from Comenius University.

The Nutrition and Healthy Ageing (Nutriaging) project will see the establishment of two new laboratories with state-of-the-art equipment which will define ageing markers to help in monitoring the impact of certain nutrients (proteins, vitamin D, and Omega-3 fatty acids) as well as physical activity on the health of senior citizens. In collaboration with partners from the University of Vienna, ageing markers will be established on both the experimental model level and the human level.

“So far we have remodelled two laboratories and bought two new machines. We are looking for suitable markers of ageing firstly on the molecular level (cell cultures) and the organic level (animal experiments), and we are preparing a human study with Omega-3 fatty acids,” said Muchová. A second human study is being launched in Vienna. The first study examined the effect of protein consumption when combined with physical exercise on the state of health of senior citizens, and the current study is examining the effect of vitamin D and physical activity on selected ageing markers.

The project in particular should help senior citizens as well as professionals (doctors, physiotherapists, and nurses) to practically apply new knowledge about the importance of lifestyle. The risks associated with unhealthy ageing will be countered by including new findings in curricula for future doctors (including first-contact doctors), nutritionists, physiotherapists, and geriatricians. Outputs will include guides on “healthy ageing”, brochures, manuals, and lectures.

“The low healthy age of senior citizens in Slovakia is not just a health problem but also a socioeconomic one. I believe that thanks to the cross-border cooperation of our experts, the undesirable position of Slovakia in the healthy ageing ranking will improve,” said Comenius University rector, Marek Števček.

The Nutrition and Healthy Ageing (Nutriaging) project of the Institute of Medical Chemistry, Biochemistry, and Clinical Biochemistry of the Faculty of Medicine at Comenius University and the Department of Nutritional Sciences at the University of Vienna is funded by an EU grant from the INTERREG V-A, SR-AT Cross-border Cooperation Programme. 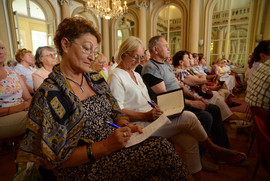 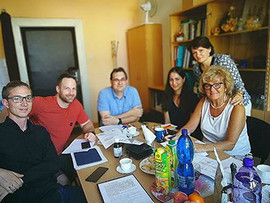 Photo: Research team from Comenius University and University of Vienna