Medics Ivan Fuljer and Mária Belinská from the CU's Faculty of Medicine joined forces to help three small children suffering from Spinal Muscular Atrophy, a disease with treatment costing almost 2 million euro. “Our idea was nice, but it was realized only thanks to the teamwork,” they say.

When they started working as volunteers at the Line of National Health Information Center (NCZI), they had no idea they’d get paid for it.  “We didn’t go there because of the money, we wanted to help,” explains Ivan, who together with Mária and two hundred other medics helped in the call centers to cope with the avalanche of phone calls concerning Covid-19 also during March. After few days the NCZI decided to financially reward the volunteers. The idea was born there. “I discussed with Mária donating part of our money to help the children suffering from the SMA. We said that it was not important whether we raise 200 euro or more, the important thing is that we engage into it and we’ll try to make these children smile again,” Ivan explained.

Alex, Amélia, Alexej. These are the names of three children who suffer from Spinal Muscular Atrophy. SMAs include a group of genetically conditioned diseases caused by degeneration of motoric cells, which leads to loss of muscular cells. In practice, this means that patients either cannot learn how to sit, stand and walk, or they lose these abilities after the first symptoms of the disease appear. Neither cognitive functions nor emotional development is affected.

There are four major groups of this disease. Each of them is represented by specific symptoms. One of the symptoms is the time when the disease appears. SMA type I, from which the named children suffer, is also called Acute infant form (or Werdning-Hoffmann disease) and manifests itself during the first 4 – 6 months of age by slowing down the motoric development. Muscular hypotonia is usually evident immediately after birth, manifested by a smaller ability to move the muscles.  Course of the disease is individual, because it is impacted by many factors.  One of the major and most common complications is shortness of breath, which can become the cause of death.  Children suffering from this disease usually won’t survive for more than two years without a medicine. That’s why it’s essential to get enough money until the end of June.

Not certified in Slovakia

There is only one medicine approved by the Ministry of Healthcare of the Slovak Republic – Spinraza. One dose of this medicine costs approximately 90 000 euro. The patient receives it directly into the spinal cord by the means of a lumbar injection every four months. All life long. There is a new medicine – Zolgensma, which is certified only in the USA. It is a genetical therapy administered once, with a 90% chance of impeding the progress of the disease. This medicine is not available in Slovakia and costs approximately 2 million euro. Even though it’s not certified in Europe yet, it was administered if the parents assumed the responsibility for the treatment in some European countries, such as Belgium, Portugal, France and Hungary. In all these cases the parents had to pay the whole sum of the medicine, just as in our case.

The idea of financial support was born at the end of March and spread thanks to Facebook groups for the students of medicine and volunteers. As Ivan himself says: “The first salary came from NCZI on April 7th and from the next day new money kept arriving. It was really a dynamic thing. Until this day we collected 1300 euro and we’re waiting for the next payday.” The collection isn’t over yet, and more money dedicated for a good thing keeps arriving. “We want to show them to never give up,” adds Ivan hopefully. 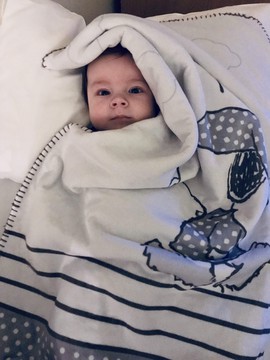